At Origin Gallery from 9th November 2018

Mary Tritschler, who has exhibited in the US, Austria, Germany and Poland, started out teaching art at St. Ann’s Ursuline Convent in Waterford having obtained her Art Teachers Cert in the old National College of Art, Kildare Street. And when she wasn’t inspiring the love of art amongst school children she was giving pottery night classes at Waterford CIT (she remembers firing pots for Nicholas Mosse). 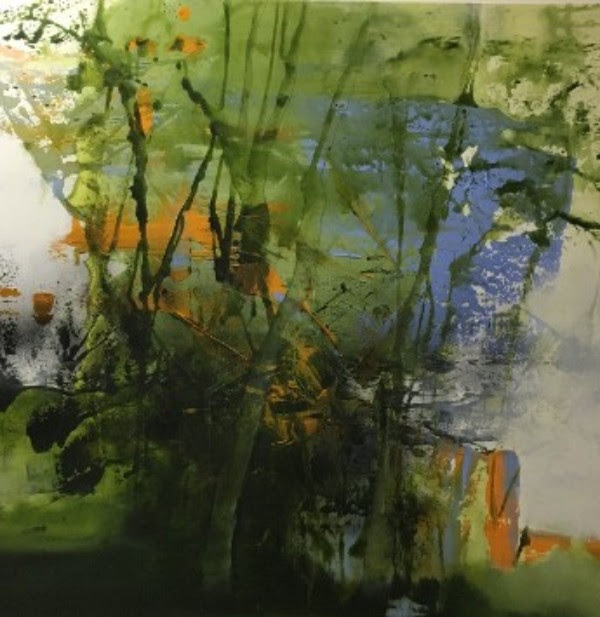 But it wasn’t until she heard of the famous Professor Markus Lüpertz, the saviour of figurative drawing at the Kunstakademie Dusseldorf in Germany that her own art practice took a leap forward in 2009.

Joining the Breitengrad Group in Bad Reichenhall, Germany– 27 artists of different nationalities, age, biography, and training united for a two year course under the direction of the eminent Lüpertz, she went on to exhibit in Austria, Poland and Germany. Soon the group will come together for an exhibition called “One Metre Square” in Bad Reichenhall.

The artist was a member of the international group IDIR (Irish word for ‘between’)-27 multidisciplinary intercultural artists took part in the 2014 Culture Ireland supported exhibition at NYFA (New York Foundation for the Arts). This had come about after the NYFA held “The Profitable Artists Bootcamp” at the RHA in Dublin- an omen perhaps for the future worth of a painting by this Waterford artist.

“I am a Visual Artist interested in painting the land, sea and immense skyscapes that are Ireland. Nature, together with its powerful atmosphere, are central to my work and I believe that the Irish are motivated by the simple raw power of the elements that buffet our Island. These natural forces are a contributing factor to their indomitable spirit which has taken our people all over the world.

I have recently exhibited in Furst Leopold Dorsten, a coal mine in The Ruhr Valley, Germany with The International Group Breitengrad. The subject of my exhibition was William Thomas Mulvany known to The Germans as King of The Ruhr; he is a fine example of the indomitable Irish Spirit.

I will be exhibiting these two paintings together with a brief history of Mulvany’s life on November 8th. Some of my work currently forms part of an Exhibition called Colour Rulesat The Offices of The Government of Upper Bavaria. I am excited to be invited to show these paintings in Dublin at Origin.”

William Thomas Mulvany (1806-1885) born in Dublin Ireland was the first child of Thomas James Mulvany and his wife Mary Field. Thomas James was a talented painter and one of the founders of the Irish Royal Hibernian Academy in 1823. Educated at Trinity College after which he worked as chief engineer responsible for the arterial drainage works of The Shannon-Erne Canal for the Board of Public Works. Today William Mulvany is known to the Germans as the man who transformed The Ruhr into an industrial heartland that has served as Germany’s economic dynamo ever since.

Mulvany was a remarkable man who contributed enormously to the development and growth of his native land Ireland and that of his adopted Westfallian home in Germany.

It is my desire to draw the viewer of my paintings through the portal of my creative practice into the two worlds on which Mulvany left an everlasting, powerful impression which has been the force which binds both of these worlds. The simple yet strong land and seascapes of Ireland have been sculpted by the elements and power of nature while man and industry have impacted on the landscape of the German Ruhr region. Both have helped to shape each country in a unique way.