ARTISTS STATEMENT
Random Stars from Bog to Kahlo by Suzy O’ Mullane comprises a series of paintings, drawings and a video piece reflecting a personal perspective on

relationships, memory, identity, sexuality, politics and migration. Throughout the works also, there’s an implied restlessness and an eroding sense of home; a desire to keep moving, the ensuing search for home. Formally the works are presented as portraits, surrealistic scenarios and self-portraits.
The latter works, self-portraits from her Wounded Deer series, based on a painting by Frida Kahlo, were recently showcased in a curated exhibition in Melbourne, Australia. 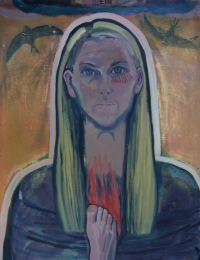 Some of the works for the exhibition were executed during a recent residency in early 2018. Also included is a large canvas, which was exhibited at the international Art Fair Context New York 2015. The video shown at the exhibition is part of a collaboration from the Migratory Pathways and Insistent Ghosts trilogywith New York based artist, Julius Kozlowski.

The title of the show, ‘Random Stars From Bog to Kahlo’ comes from a written piece from early January 2018 during a residency in Kerry, as follows…

‘Up there in a lonely cottage, tracing the trajectory of famine in the bawling of the wind. Past and present are on nodding terms here: these are the crossroads at which the living and the dead meet. I think I am alive, if I am not mistaken. Recent revelries took a toll: we laughed, sang and danced our way into the new year. A bunch of artists and kindred spirits and Auld Lang Syne intersecting with the hills and it’s primal occupants. Thoughts of love and of travel: the ocean carries with it flavours of sweet Mexico, and deposits itself on holy Irish bog. Many’s the time I have crossed the towering Pyrenees. And I once fled to the arms of Liberty. And here the wind will not cease. It has a particular resonance. It has drilled its way into my receptive soul, beckoning me to obey new creative urges that are stirring inside.’

ABOUT THE ARTIST
Suzy O’ Mullane is currently represented by J Cacciola Gallery NJ, The Origin Gallery Dublin and Phylogeny Contemporary Gallery Seattle. Her work is also featured in Pierogi Gallery NY flat files and has been showcased in major fairs in the US and Canada, including Art Miami, Art Toronto, Context NY, Art Chicago. She has been exhibiting consistently since 1996, in Ireland and internationally.

She has had solo exhibitions in LA, Seattle, Dublin, Cork, Navan, Tralee, Cill Rialaig. O’ Mullane co-founded and wasSuzy O’ Mullane idirector (from 1996 – 2002) of ArtTrail, a visual art event which was based in Cork and which showcased the work of approximately 200 local, national and international artists annually. She held a position of the board of Triskel Arts Centre, Cork, and Backwater Artists, Cork from 2001 to 2004.