In an essay in 1908 called Creative Writers and Day-Dreaming, the Austrian psychologist Sigmund Freud claimed that myths and stories could reveal the collective fantasies and values of a nation. He surmised that the hero figure in stories generally represents what he called the ‘ego,’ our sense of self or personality.
Later, in a book published in 1964 called Man and his Symbols, Swiss psychiatrist Carl Jung explained his archetypal characters of the psyche, one of which is the hero found in most ancient and modern myths.

This exhibition is an examination of cultural symbols in light of Freud and Jung’s theories. Although references to different continental cultures are made throughout the work, the emphasis is on the collective consciousness of Ireland, exploring the Prehistoric, Celtic, Scandinavian and Christian symbology which has influenced this island. 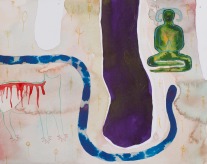 The focus of the show is on the heroes and antagonists of Irish myth. Of particular importance are three characters in the famous Táin epic; Cúchulainn, Queen Maedhbh and the ancient Goddess of War, The Morrigan. These works are not literal illustrations of myths; they are instead an examination of archetypal symbols, with the aim of further understanding the ‘fantasies’ or the psychology of the Irish nation, and investigating these symbols’ relationships to contemporary Ireland.

In Gods and Heroes of the Celts by Marie-Louise Sjoestedt, we are told: ‘Some peoples, such as the Romans, think of their myths historically, the Irish think of their history mythologically.’ This was said in reference to myths surrounding the first arrivals of people to Ireland; however it is true if we also consider our modern history. Cúchulainn, arguably the greatest fictional Irish hero, was elevated to a tragic symbol of Irish rebellion when Eamon de Valera unveiled a statue of his death by Oliver Sheppard at the GPO in 1935, resulting in the Easter Rising developing a mythic nature.

The title for this exhibition derives from the humorous Irish slang term for courage or bravery: liathróidí (literally translated as ‘balls.’) The title-piece of the show depicts a significant symbolic event of Irish myth: Setanta killing the hound and in doing so, becoming Cúchulainn. The show celebrates the heroic actions of mythic Irish figures, keeping in mind their intrinsic link to more contemporary figures of history in a year of considerable importance concerning reflection and national identity.

Ronan O’Reilly, “After the Salmon”, 30x23cm, Ink and watercolour 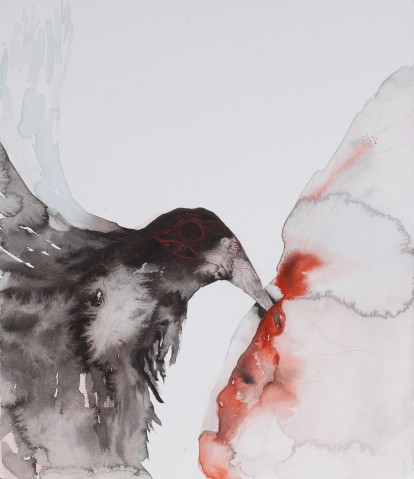 Ronan O’Reilly (b. 1993, Kildare) is an artist working in Dublin. He graduated from Dublin Institute of Technology in 2015 with a BA in Fine Art. His paintings and drawings are concerned with human consciousness and the development of culture.
His father’s family are from Co. Wicklow, and time spent there at ancient stone circles, places of worship and sites of Irish rebellion was formative in a long-term interest in Irish and global history, mythology, and cultural belief systems.

A study period in Greece and Turkey in 2014 prompted him to explore these interests as subject matter in his work. Since then he has travelled throughout Europe to study cultural art, including an extended stay in Berlin and a research trip to Denmark in order to study Scandinavian mythology in preparation for this show.