Patrick Walshe has had a long and varied career as a professional painter going back to his first show with Tom Caldwell Gallery, Dublin in 1978. At the height of economic

gloom in 1982, Walshe moved to New York where he worked and exhibited in the East Village scene of that era, later moving to Los Angeles where he lived for a further six years. He has exhibited widely in the U.S. over many years. He moved back to Ireland in 1993 via a circuitous route that took in India, Indonesia and several African countries. He lives with his family in the Wicklow Mountains and has had several exhibitions both here and abroad since his return. His paintings are influenced by an intense love of the landscape.
They evolve from realism to abstraction and back again. They are a distillation of the emotional, the colourful and the joyful response of an enthusiast for life’s permutations. Walshe is intrigued by the shamanistic ritual of applying paint that stretches back 30,000 years; the connection to the ineluctable forces of creativity that seem to have compelled people to make marks on flat surfaces since the earliest sentient times. 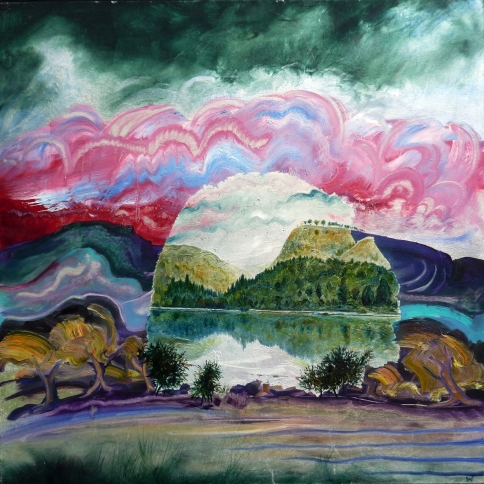 He works mainly in oils on silver leaf applied as a ground to the surface on which he then paints. He explains this as a reaction to our obsession with shiny screens. In adding an extra dimension and mood by interlacing translucency with opacity, the paintings change as a parallax depending on the angle of inclination and the lighting in which they are viewed. There is a richness of colour and an intensity and tension in these paintings.

Patrick Walshe ‘We Were Cast Adrift on the Morning’ 100 x 100cm, oil on silver leaf on canvas 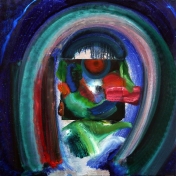 Patrick Walshe, ‘What is Worth Knowing’, 60x60cm; oils on canvas and board

Patrick Walshe, ‘The Land of Fools and Prophets’, 60x60cm; oils on canvas and board

Patrick Walshe, ‘A Constant Companion’, 60x60cm; oils on canvas and board

The artist bequeaths…Special exhibition of 15 paintings donated by the artist to the Marie Keating Foundation to support cancer survivors. For sale in one Lot.

This was the starting point for a series of fourteen “Nocturnes” with a “Prelude”, which artist Patrick Walshe created as a response to the journey of cancer treatment which his wife Ros underwent.

“The helplessness of the onlooker, the worry that over takes a spouse at 4am waking rigid with fear and anxiety, was channeled into these paintings which are the night prayers of the fellow traveller on this enforced emotional journey. It was a way of expressing all the hopes, worries and minor triumphs that are ubiquitous to all who travel this road.

When eventually a happy outcome was arrived at and the final painting, “Return of the Dawn Chorus” had been completed, Patrick Walshe decided to gift the series to the benefit of a cancer charity.

The sale of The Nocturnes will support the Marie Keating Foundation’s Survive and Thrive Programme for men and women who have come through treatment for any type of cancer. The exhibition is also an opportunity for Patrick Walshe to show other recent paintings including work from his exhibitions in New York in 2015 an Abu Dhabi in 2014.” 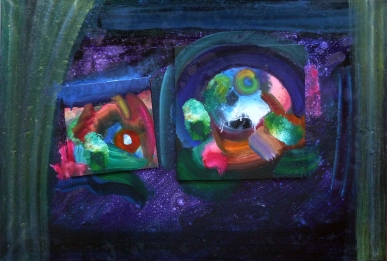 Patrick Walshe, ‘From the Outside In’, 90x60cm. oils on canvas and board

Patrick Walshe, ‘From the Inside Out’, 90x60cm. oils on canvas and board