“The role of drawing is fundamental to my work. These drawings of crows and animals are sometimes prefaces to paintings, and sometimes a relaxation from them. They are  works in their own right. They are witnesses to the changes in the landscape of Teeromoyle in South West Kerry – my mother’s place. My mother died quite young but I was reared on her stories about her childhood in the mountains, so family and a sense of place haunts my work. My mother’s past is my past.  Her parent’s house is long gone but the field where the house was remains unchanged and I have painted this field many times. Painting the field sometimes makes me feel snug, warm and sheltered and other times exposed, vulnerable and turbulent. I remove layers of earth while adding layers of paint.

This is my subject matter, not the meaning of my paintings.“ 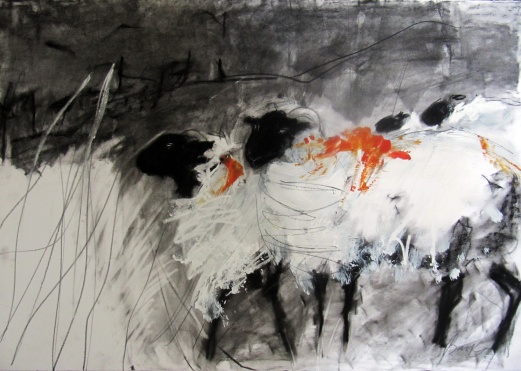 If John B. Keane’s great 1965 play, The Field, is a parable of atavistic landlust and communal corruption, there is another Kerry field, up Teeromoyle mountain on the Iveragh Peninsula, which is attuned to another kind of memory. For Margo Banks, it’s the seat of her near-ancestors, their traces mysteriously vanished from within a walled meadow; like a secret garden in the remote, scraggy townland of Thoon.Mining a web of long-cherished, dwindling family connections to the district, Banks has increasingly tethered the thinking behind her work to this vacant plot of ground. Here once stood the house where her mother Kathleen Josephine Barry (Caitlín Seosaimhín de Barra) grew up: the youngest of thirteen born to Cornelius Barry and Ellen O’Sullivan, headmasters of the two-room schoolhouse across the road.

Banks is an assured, accomplished draughtsperson, painter and sculptor. She works rapidly and loosely at the big, boisterous drawings which are the cornerstones of her work; many depicting certain totemic animals of those hillsides. She has a keenly observed mastery of form, using a muscular shorthand to pin down telling essentials of anatomical detail: the strange ungainly bone-structures of cattle and goats; the kinetically jointed skulls of her ever-popular, blunt-nosed hares. These she overlays with an impatient blizzard of strokes, swipes, smudges, hatchings, scribble-explosions and wildly inscribed fragments of poetry. The effect is of peculiar force and blurred animation; topped with restless scrubs and sprays of outlandish colour which are yet somehow perfectly apposite.

Her signature hares, based on the Irish subspecies, Lepus timidus hibernicus, are pookas of a kind. Glowering, startled or pensive, they dance, skip, careen on their springloaded hind limbs, or simply squat, sphinx-like; garlanded with washes of green, tawny-orange or wild pinks; their pared nerves evident in their 360-degree, prey animal’s vision, wrapped around their narrow skulls.

In Ireland as elsewhere, hares are mythologised as otherworld beings, from the legend of Oisin to centuries-old spooktales of wounded hares chased to ground, only to find crones or princesses bleeding from leg wounds; as witches in disguise suckling cows in the fields at night; or their banshee associations, thanks to their piercing distress-cry. One piseog was reported from Kerry in 1893: that the country people wouldn’t eat hares, believing their grandmothers’ souls had entered into them. As Banks says:
“They just have this otherness about them. They share the world with us, but they don’t seem really aware of us.”
Banks’ crows are another archetype: strutting cocks of the walk or squawking skybursts of carpal feathers: hooded crows, carrion crows, daws, choughs – beady-eyed imps of fiendish cleverality. Banks seems to relish their gallows associations, their undertaker’s plumage, their reputation as ill-omens.

The autobiographical strain in Banks’ work stems from tales her mother spun on long ago summer holidays to Ballinskelligs and Caherciveen, with its sacred mountain, Cnoc na dTobar, and the derelict skull of the Famine-era workhouse out the road. But more sacred to memory were the drives up to Teeromoyle and the field-garden of her mother’s childhood.

Even then, the house was long gone; and only a few panda-faced sheep haunted the place. Banks has one 1930s photograph of the fine two-story house with its tiled roof and walled back yard; the misted hills beyond; and in the next field, a man picturesquely tossing hay. But only the perimeter drystone walls now remain, overgrown by trees and hedgerow life. Banks returns there often, to sketch and walk the field, searching for vestiges of the house, yet other than vague lumps in the shaggy terrain, she finds nothing. Instead, the field is a sort of time-machine: sometimes joyous, sometimes oppressive; veined with tragedy and shadows from harsher times. Taking her sketches back to the studio, its moods infect her. She has said:
“Painting the field sometimes makes me feel snug, warm and sheltered; and other times exposed, vulnerable and turbulent.”
Most people in Teeromoyle are elderly now, yet nobody remembers how such a substantial house as the Barry’s disappeared. A neighbouring farmer still grazes animals there, but it now seems no one owns the field.